My main concern leading up to my third labor was being in place in time for the delivery. The labor with my second baby had been very, very fast. She was born in the hallway entrance to Labor and Delivery at a hospital. I was still sitting in the wheelchair with my sweatpants on. A fast, easy labor was somewhat of a relief but also somewhat scary. “What ifs” haunted me and I knew I wanted it to be more controlled (safer) next time.

I transferred care to the Minnesota Birth Center at 32 weeks with Baby #3. With every midwife I met at MBC in the appointments leading up to delivery I talked about how I really wanted to be able to be “in place” before the baby was born, which meant at the birth center and in the birthing room. Even though there were stated policies about when to come in and that the birth center did not have a midwife on site 24/7, how could I make this happen? Each midwife listened and basically said “Yes, we know your birth history, we trust you, we’re with you.”

This was such a HUGE difference from other prenatal care I had received where I felt that I was just another patient and no one was listening to me. This was so individualized! I was not being treated as another “lowest common denominator” patient but as an informed and capable human being.

One morning around my due date I had a few contractions and then nothing happened again until six days later. Around 4 p.m. I started to get a labor feeling, crampy and nervous/excited. The feeling wasn’t going away and was actually getting stronger. Around 6pm I called my mom to come spend the night just in case (to be with my other kids) and called my doula and the midwife. The midwife said to try to get some sleep and keep in touch with any updates. I was relieved and excited and nervous so I laid in bed but didn’t really get to sleep. I called the midwife again around 11 p.m. and gave her an update on the time between contractions and how I was feeling and such. Sensations were getting stronger but were still irregular. She said to stay home and keep in touch. Things kept progressing at home and just an hour later, around midnight, I called her back and said “I can just feel it, it’s time for me to come in.” She said, “Ok, see you soon.” My husband and I got to the birth center and settled in by about 1 a.m. and the baby came just 2.5 hours later! 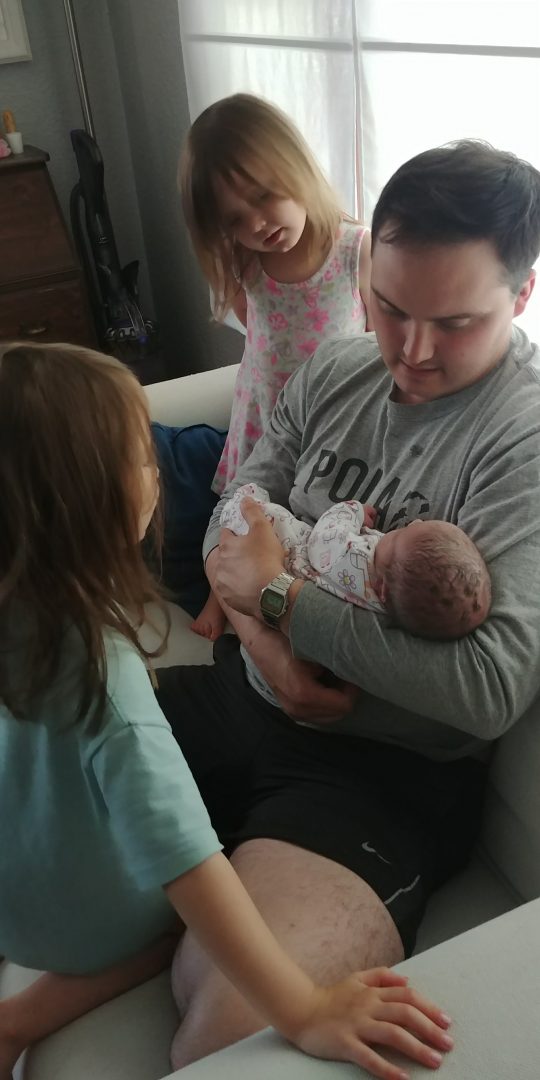 When I first got to the birth center I was able to laugh and talk in between contractions but very quickly was unable to do anything but focus on what my body was doing. This labor was a lot harder after the second baby (who basically fell out in the hallway). The support of the midwife trusting the process was extremely helpful and reassuring.

I labored for the most part kneeling on the bed, leaning against a yoga ball on the bed, with a blindfold rather tightly bound around my head and eyes. I’m not entirely sure what was going on around me. The midwife asked to check the fetal heart rate at one point and that was the only “intervention” I needed during the labor (that I remember) and that was exactly the plan.

The midwife suggested I try using the bathroom. The movement of walking towards the toilet and back broke my water and descended the baby. His head came out in one push while I was standing in the doorway between the bathroom and the room. 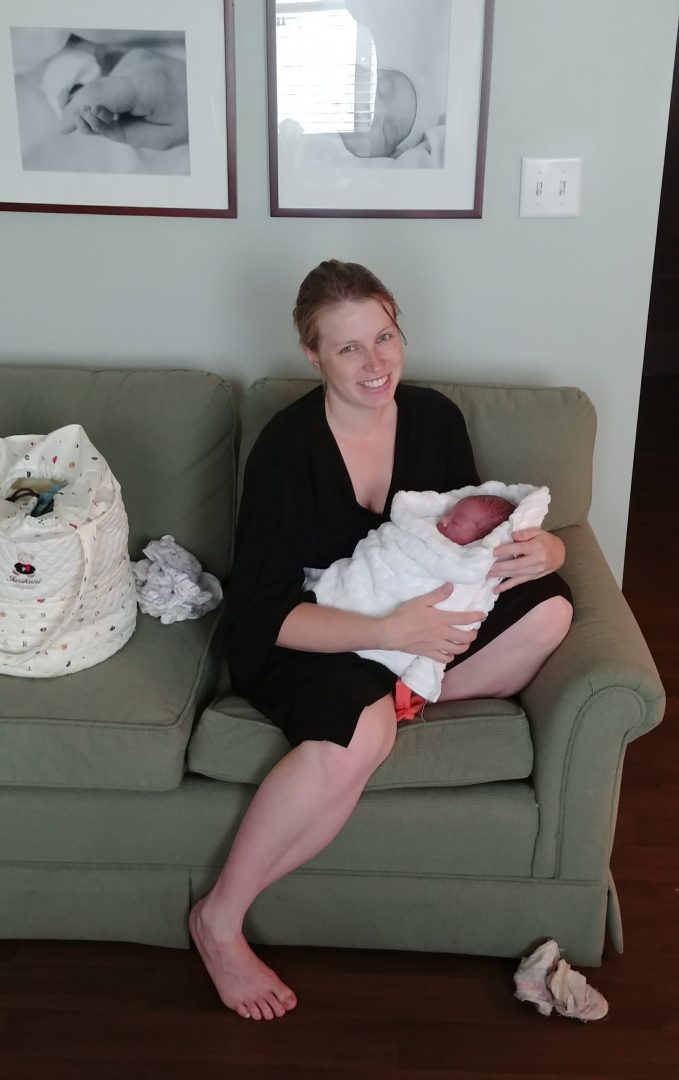 Baby’s shoulders got a bit stuck on the way out and the midwife knew exactly what to do (“walk over here, get on all fours, now lean back” or something like that). At first I was frozen because how do you take a step when there is a baby’s head between your legs? But my husband and doula helped me do as she said and it worked! He was birthed on the next push, healthy and perfect…in the hallway, but this time on purpose, in the place we were all ready for him.

Thanks to Elle for sharing her birthing journey with MBC as we celebrate this International Day of the Midwife! Do you have an MBC birth story you’d like to share? Email it to info@theminnesotabirthcenter.com.